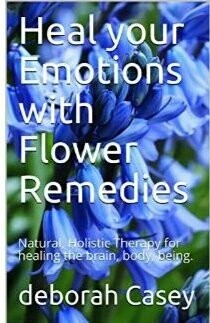 Heal your emotions with flower remedies

Emotions are powerful and they trigger a cascade of neurological chemicals that flood the body. This can cause one of two responses; relaxation and ease or stress with it's many symptoms. We have a choice to make between allowing stress to drain vitality and energy which leads to fatigue, exhaustion, irritability and other not so pleasant states or we can choose to work on living a life that is focussed upon simplicity and ease that leads to contentment.

This little book shares a system of complementary and alternative therapy that is based upon simplicity and ease; The Flower Remedies system was developed by Dr Edward Bach. 38 Remedies seek to restore balance to the emotions and thus improve vitality of the person.
A personal experience; in February of this year, 2019, I was anxious and fearful and I was due to have major surgery for the removal of mesh, a medical device that has caused great suffering to hundreds and thousands of people. I believe I am very lucky to still be alive and to have been relieved of the device. The device had migrated and embedded around my ureters and necrotic tissue was also removed.
Before surgery I used the flower remedies and after the surgery I used the flower remedies, including some that are not in the Bach 38 system; Bluebell, Larch, Mimulus, Rock Rose, Star of Bethlehem and Walnut. My recovery was greatly aided.
I also used homoeopathic remedies which I had asked the medical staff if it was agreeable, they were worried that these would affect the medications they were providing! I asked my surgeon if it was fine to use the homeopathic medicines and she hesitated, pondered and then agreed 'as long as you don't use anything that will affect the tinzaparin'! I found this intriguing as we are often told by the establishment that homoeopathics are placebo.
And now I have chosen to share 'Heal your Emotions with Flower Remedies' as a learning tool. This learning tool is also available in other formats shared within the ebook.

Save this product for later